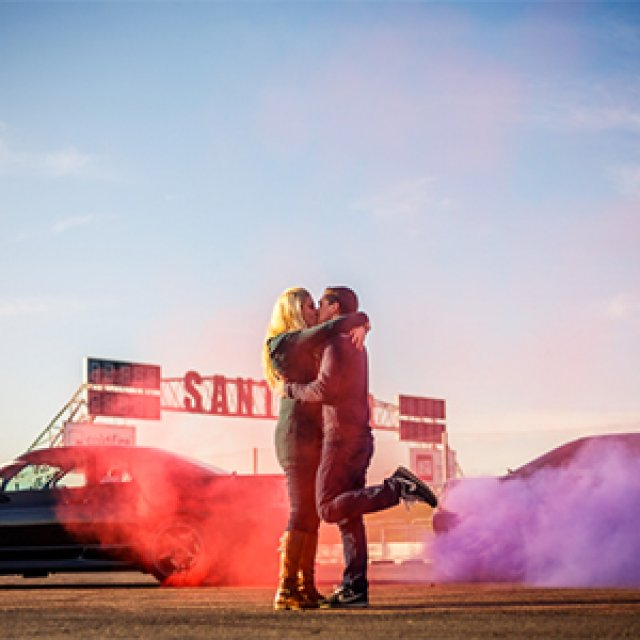 Christine and Lee from Cambridgeshire, have booked not one, not two but five cars for their wedding from a traditional London bus to a sporty Ferrari.

Christine shared her story with members on www.ukbride.co.uk the number one wedding website in the UK.

Their Save the Date photos hinted at their vehicle theme as drift cars revved their engines, surrounding the couple with red smoke.

The wedding will also feature a cake made of tyre tiers, various tyres around their teepee wedding and more.

Both bride and groom have an interest in motors, and Lee is a professional drift car racer.

Engaged couple Lee and Christine are motor racing enthusiasts so cars will play a big part in their wedding, with not one, not two, but more than five cars plus a number of vehicle references throughout their day.

Christine shared her plans with www.ukbride.co.uk the number one wedding website in the UK with over 650,000 members, all sharing their ideas for their weddings.

“Lee and I met at a local bar,” says Christine. “I was with my friends and tripped on some furniture. As I flew forward, Lee grabbed me and pulled me into him.”

The couple had been together for a few years before Lee decided to take the relationship further.

“His proposal completely caught me off guard. I came home from work, and he’d put up signs directing me around the house. They lead to the garden, and I expected water balloons, but he was standing there in the rain with an umbrella, surrounded by red roses, next to a table with champagne flutes on and a small ring box.”

The couple will marry in October. Lee competes in the UK Drift Cup Championship, and so do many of his friends, so it was important they picked a date that didn’t fall on a racing weekend.

On the day, there will be a Cinderella carriage, a Ferrari Limo, a Chevrolet Bellaire, a double decker red bus and an ice cream cab.

The bottom tier of the wedding cake will be white with a tyre imprint, and the cake stand will also be from tyres. There will be tyres used as chairs outside the teepees too.

“We have so many vehicles because Lee has always been around cars, and it is an important part of our lives,” says Christine. “Lee drove his first car at the age of 10 and he grew up in a racing family. He races professionally now but also provides taxi rides to the general public, and I assist by being his pit-crew.”

“It’s a running joke that I am a princess, so I’m having a Cinderella carriage. When I suggested it, my dad said: “How else does a princess travel?”

The couple will have three teepees. They are having a sit down Chinese meal followed by the ice cream cab. In each of the teepees we will have fire pits and a starlight dance floor. Christine practices Aikido too, a modern martial art, and she has arranged with her Aikido Sensei to borrow a traditional blade to cut the cake.

“We didn't want a strictly traditional wedding because it didn't suit us. I am known as the one who is a little bit wacky among my friends. As a couple we rarely get a chance to sit down due to our various hobbies and activities. We love that we have been able to introduce so many personal touches into our wedding.” 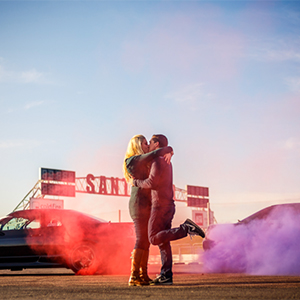 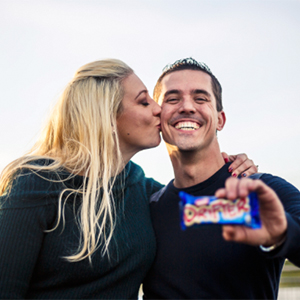 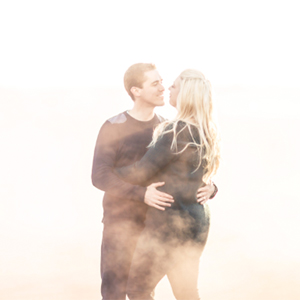 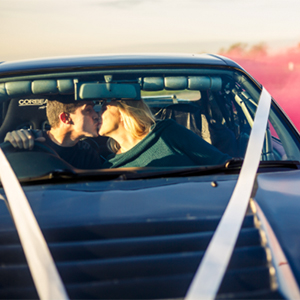 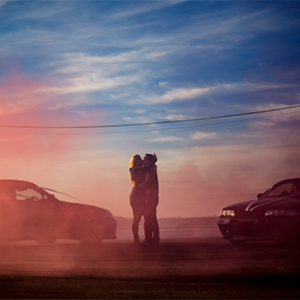