When you join UKbride we will enter you into a prize draw where you could win a dream wedding costing £25,000

Mark and Tracy decided to have a medieval themed wedding

We spoke to the happy couple, "we have known each other for over 15 years, and became close friends when we worked just a couple of doors away from Mark's shop when I worked at a local hair salon.

"Two years ago, when we were both single, we met up at Tracy's brother's wedding. We began seeing each other and soon followed a very romantic proposal. On Christmas Eve of 2006 an the stroke of midnight in Burton Church, just after the midnight mass service, he knelt down on one knee in front of our family... it was lovely, so romantic!"

Planning the wedding soon followed, "having both been married before, we knew we didn't want a traditional wedding. Equally, we really wanted all those attending the day to be involved, and wanted something memorable, something which reflected our interests and passions!" It was something different indeed, "the era of history which really appealed was that of Medieval times... we loved the costumes, tales of old - romantic stories of maidens being rescued by knights on chargers and so on... this seemed like a great theme for our day... !

"The planning was quite difficult given that we'd opted for such an unusual theme. Planning a wedding is difficult enough without having to organise props, costumes, medieval entertainers and so on... We searched on the internet for weeks and came across a company for Mark's outfit to be made, called Guinevere's Dream. They seemed like a great bet... particularly as they were named after King Arthur's queen consort, and after a face-to-face meeting with them, we discovered that they could help us out with the props - everything from outfits and swords to medieval tables, cutlery and entertainers!

We loved the tales of old - maidens being rescued by knights and so.

"They were amazing, we felt really relieved when everything began to fall into place. We went all over the country to source materials for outfits from wedding fayres and even ended up at the Whitby 'goth' weekend to find the right materials for outfits plus swords and belts. Having a theme made our planning challenging, but we were really delighted with the overall effect."

Choosing the attendants wasn't difficult, "there was really no doubt! We chose my daughter Amy, and my niece, Holly, who is two, to accompany me down the aisle!" For the Groom, "Simon, my son, did a sterling job as an usher whilst my uncle, Allen, to whom I am very close, was by Best Man."

"I had already seen a design I loved - a rich silk velvet red skirt, on a dress with peony flowers with a long train that had gold edging in a floral design and an embroidered gold peony bodice and a red velvet jacket with gold edging and gold overlay on jacket. Our designer MMK made changes to fit in with our theme. I was thrilled with the result!"

And finally, the big day finally came. "I was a little nervous," explained Tracy, "particularly given the theme that we'd opted for, and remember really hoping that Mark would like my dress - having a theme created pressure on top of that experienced by most brides and grooms, but all I could do was cross my fingers and hope that everything would be alright on the day!"

"I was really nervous, but like most grooms, I couldn't wait to see Tracy walk down the aisle! Walking down the aisle was amazing, even though Tracy was, fashionably, one hour late... someone said she was keeping to tradition and using a water clock!"

"Our reception was held at Hemswell Court - this proved a fantastic venue with great staff members who were very helpful with arrangements and excellent on the day itself."

"We had to cut the cake a little bit early as it started to lean because the room was so warm... perhaps thanks to our fire juggler! One or two guests were put into stocks for having what we had decided were dodgy costumes... we also had a jester and several knights who really kept the guests entertained!

After the wedding, "we had a fantastic honeymoon on the beautiful Greek Island of Santorini. It was so romantic with beautiful whitewashed houses on the side of soaring cliffs and some amazing sunsets!

"We would recommend all our suppliers both for exceptional service and accommodating our theme, as you can see it was an unusual day, but a spectacular one, and one which we'll remember for the rest of out lives!

And finally, how are the happy couple finding married life? 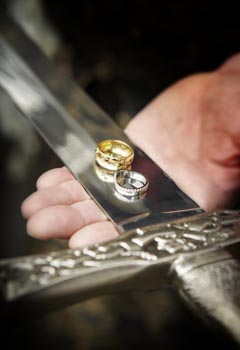 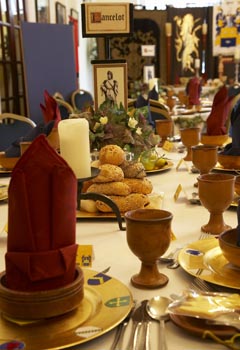 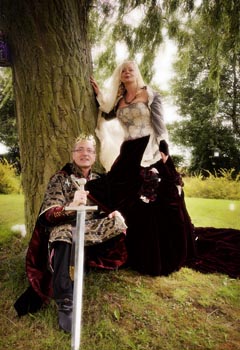 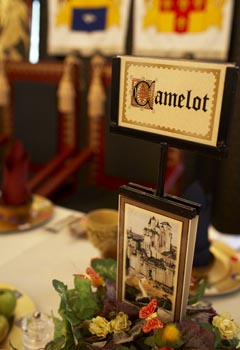